Black beans have an Oxygen Radical Absorbance Capacity (ORAC) score of 4,181. This is one of the highest scores among regularly eaten foods. The only food that absolutely overpowers black beans in terms of antioxidant capacity – at least by ORAC score – is cacao. So now you have an excuse to eat chocolate…

The antioxidants in black beans are contained almost entirely in the seed coat. Wikipedia says that the black bean contains up to 2.78 mg of anthocyanins per gram of their seed coat*. 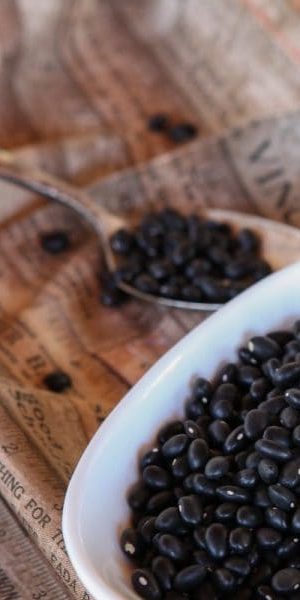 Black beans contain three main anthocyanin antioxidants: petunidin, delphinidin, and malvidin. They are the antioxidants that are mainly responsible for the black colour of the beans. The beans also contain quercetin and kaempferol. All of the antioxidants listed here have been shown to have anti-inflammatory properties.

Black beans also have different sorts of hydroxycinnamic acids, all of which work as antioxidants. These include triterpenoids,  sinapic acid, ferulic acid, and chlorogenic acid. Black beans are also excellent sources of the antioxidant minerals manganese and zinc.

The anti-inflammatory properties of the antioxidants in black beans are so powerful that some use black bean broth as a cure for gout and arthritis. Though scientific studies haven’t been done, the experience of very many people suggests that it really works. Even if you don’t have gout or arthritis, the antioxidants from black beans can be a help for you. Research has suggested that antioxidant consumption helps prevent many diseases, such as cancer and Alzheimer’s. They have even been used at times for symptomatic relief of colds and flus.

Antioxidants heal the body by removing free radicals from the bloodstream. Free radicals are single oxygen atoms, no longer in the form of O2 or other molecules that would limit their reactivity. Because of this, they react with molecules in the body very easily, and can cause DNA damage in this way. This can lead to many diseases.

As we age, our bodies’ ability to reduce free radicals of its own accord goes down, which is why it is so good to get antioxidants from our food. Antioxidants are just what they are called: anti-oxidants. They remove the dangerous free radical oxygen from the blood.

So black beans have a lot of them, and for this reason can be excellent treatments and preventatives for many ailments.