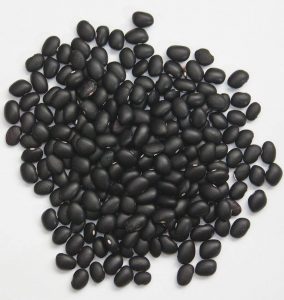 Thought to have been first cultivated in Mexico and Central America 7000 years ago, the black bean is now a staple of many cuisines across the Americas, from certain parts of the USA to Mexico, Cuba, and other Latin American countries. In Spanish they are called frijoles negros. Another common name for them in English is black turtle bean.

Black beans are distinguished from other beans by their relatively small size, black colour, and deep, rich, almost earthy flavour. Because of this flavour, they make an exciting substitute for meat in many recipes, such as in the popular tex-mex black bean burgers.

The flavour is so strong, in fact, that it actually comes out into the cooking water, making this water a delicious and very rich and nutritious broth! Some have used black bean broth, in fact, as a treatment for gout. It can serve as such because it provides a lot of nutrients, including the black-coloured anthocyanins, which are linked to the prevention of many different diseases.

You can also keep your black beans in the liquid and make a tasty black bean soup or stew.

Compared to other beans, black beans have more fibre and a very good nutritional profile. They are rich in folate as well as iron, calcium, and four other minerals. So really, black beans are a truly excellent food; both tasty and nutritious. 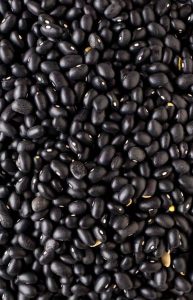 How I Discovered Black Beans

I discovered black beans one day while searching for a good recipe for vegan burgers. After trying out many recipes which didn’t quite do it for me, I discovered one with black beans. It was very good.

I made extra black beans, though, and we found that the beans were good just on their own. My partner was eating them with a spoon and in a couple of days had eaten all of them – a kilo or so! The beans had a very very tender crumbly texture and a sweet rich flavour. They were black outside and white inside, a pleasing contrast.

What’s more, I found the cooking water had as much flavour or more than the beans! I enjoyed it very much with just a little salt, drunk from a cup.

Since then I’ve been inspired to buy black beans more often, and I even decided to make this website about them to serve as an information resource to others.

Why eat black beans? Let me count the ways.

One, because it will get you to eat less meat. Do you have any idea what all that meat is doing to your body? All that cholesterol and saturated fat? Studies like The China Study linked meat consumption to all sorts of lifestyle diseases including heart disease and cancer. Cutting down on meat is just the smart thing to do.

Black beans can save you from your old meaty ways. They are protein rich, as well as containing calcium, iron, and other minerals. They are also a good meat substitute as far as flavour is concerned, being rich and almost “meaty” in flavour and quite dense and meaty in texture too. In general, beans of all sorts are quite good as a substitute for meat too. Consider making at least one of your meals each week based on beans (black beans or other beans). You’ll find it easy, tasty, and really not lacking anything your diet requires.

Two, black beans have a great flavour and can connect you to cuisines from all over the Americas. Check out some of my recipes for black bean concoctions to see what I’m talking about.

They are a really great food.